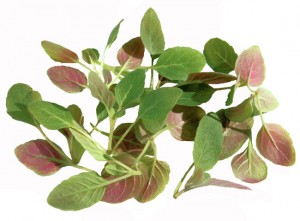 Microgreens (micro greens) are a tiny form of young edible greens produced from vegetable, herb or other plants. They range in size from 1″ to 1 ½” long, including the stem and leaves. A Microgreen has a single central stem which has been cut just above the soil line during harvesting. It has two fully developed cotyledon leaves and usually one pair very small, partially developed true leaves. The typical stem and leaf configuration for micro greens is about 1” to 1½” in height, and ½” to 1“ in width across the top. Microgreens can have surprisingly intense flavors considering their small size though not as strong as mature greens and herbs.

Microgreens are used as a fresh flavor ingredient primarily in restaurants serving upscale cuisine. These restaurants place a strong emphasis on both the creative presentation and flavor of their dishes. Microgreens’ delicate, fresh appearance adds beauty and dimension combined with a range of distinct flavor elements.

Microgreens have been popular in upscale culinary establishments for twenty years. Microgreens have become a solid ingredient in the finest restaurants, and Fresh Origins has grown from a tiny start-up to America’s leading producer. Fresh Origins prides itself on providing the most consistent quality and wide variety available anywhere. In addition, we regularly introduce new and exciting Microgreen varieties to the culinary world.

Microgreens have been produced in the United States since about the mid 1990′s beginning in Southern California, then San Francisco and spreading eastward after that. Initially, there were very few varieties offered. The basic varieties are Arugula, Basil, Beets, Kale, Cilantro and a mixture called Rainbow Mix. They are now being grown in most areas of the country with an increasing number of varieties being produced.  Although many people who are learning about Microgreens for the first time assume they are used in salads, they are almost never used that way in fine-dining restaurants.

A form of Microgreens sold in a specialized growing medium, cellulose (paper) pulp, has been produced in Europe since about 2002. Recently, living Microgreens have been offered for sale in the United States as well. There are a few reasons why this format has not been widely utilized. This method requires more packaging in terms of either boxing or heavy plastic trays and growing medium resulting in a much higher cost for a significantly smaller yield.  The quality is often soft and very stringy with this method. It is also more costly to deliver in this form. For those who care about sustainability, living Microgreens are the least sustainable and the most wasteful of our resources.

The other challenge with living Microgreens is that the product, may start out fresh and vibrant just as it is removed from the specialized growing conditions of a greenhouse, but once they are put in a restaurant kitchen or restaurant cooler, the quality and flavor quickly declines. While they can still be considered alive and growing, once removed from the greenhouse, they rapidly begin to get even more soft, stretched, and stemmy as they lose color and flavor.

Sprouts are simply germinated seeds. What is eaten consists of the seed, root, stem and pale, underdeveloped leaves. The FDA seeks to regulate all businesses that produce sprouts due to numerous outbreaks of food poisoning (11 recalls/alerts in the past year alone). In 2011, 52 people died and thousands got sick from consuming organic sprouts in Europe. The European Food Safety Authority (EFSA) has now warned consumers against eating sprouts or sprouted seeds unless they are thoroughly cooked. Salmonella and Escherichia coli O157: H7 have been the major causes of sprout-associated illness outbreaks. Commercial sprout processors must follow rigorous FDA Guidelines for the production that include multiple laboratory tests of each batch for the presence of pathogenic bacteria, to minimize the threat of foodborne illness. Despite rigorous efforts to reduce foodborne illness caused by sprouts, more and more restaurants are no longer able to cope with the risk and have removed sprouts from their menus. In October 2012 one of the nation’s leading food retailers; Kroger announced that it would no longer sell sprouts in its supermarket chains because of the potential for foodborne illness. “Sprouts are unavoidably unsafe products” said Caroline Smith DeWaal, Food Safety Director of the Center for Science in the Public Interest. Walmart Stores discontinued selling sprouts in 2010. 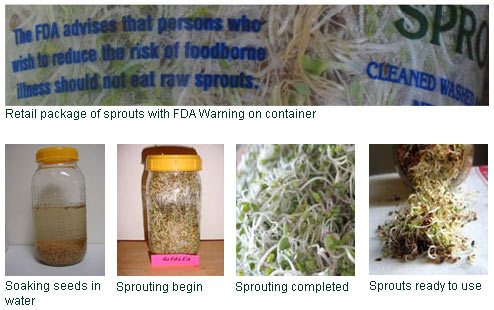 Sprouts are produced entirely in water. The seed is not actually planted. A high density of seed is placed inside of sprouting equipment or enclosed containers. The seed germinates rapidly due to the high moisture and humidity levels maintained in the enclosures. Seeds can also be sprouted in cloth bags that are repeatedly soaked in water. For most sprouts, the seeds are soaked and placed in a rotating drum or container, kept at or near 100% humidity and maintained at a temperature of about 80 degrees F. When this processing is finished, usually after about 48 hours, the sprouts are ready for packaging and sale. The sprouting process occurs in dark or very low light conditions. These dark, warm, wet, crowded conditions are ideal for the rapid proliferation of dangerous pathogenic bacteria.

After this process of soaking and repeated rinsing (2-6 or more times per day to prevent spoilage), the sprouted seeds are ready for consumption. This is long before the expansion of any leaves. These sprouted seeds are generally sold as a tangled mass of very pale roots, stems, and leaf buds. Properly grown Microgreens cannot be produced using these methods.

Microgreens are not processed in the water. Microgreen seeds are planted and grown in soil or a soil substitute such as peat moss or other fibrous materials. They are ideally grown in bright natural sunshine, with low humidity and natural fresh air. The seed density is a fraction of what is used in sprout processing so each individual plant has space in which to grow and develop. Most varieties require 1-2 weeks growing time, some 4-6 weeks. After the leaves are fully expanded the Microgreens are ready for harvest. They are cut above the soil surface and packed without any roots. Some Microgreens are sold while still growing, rooted in the soil or another growing medium so that they can be cut by the end user. The living trays are more expensive and lower quality than well-grown pre-cut Microgreens

If the stem is cut leaving root behind, and it is not produced in water, it is a Microgreen, not a sprout. Microgreens that are grown in sunlight with plenty of space and good natural air circulation have increased vigor resulting in more color and flavor with better shelf-life, compared to those grown under unnatural artificial lights.

The conditions that are ideal for growing Microgreens do not encourage the growth of dangerous pathogens. These growing methods would not work for the production of sprouts.
Various Microgreens Ready For Harvest

To minimize confusion, it is important to avoid using words like “sprouting” or “sprouts” when writing about or describing Microgreens. FDA inspectors do not always understand the differences, potentially putting a Microgreen grower in the position of explaining them or being shut down. There could be confusion if the grower has described Microgreens as being in any way similar to sprouts. The FDA will consider enforcement actions against any party growing sprouts commercially, who does not have effective preventive controls in place, involving extensive microbial testing and FDA oversight.

The potential for food safety issues with Microgreens may be increasing due to the number of industrial, vertical Microgreen operations in which low light intensity, low air circulation or most commonly, a lack of GAP (good agricultural practices) and GMP (good manufacturing practices) based food safety procedures. Certain provisions of the FDA’s Guidance for Industry: Reducing Microbial Food Safety Hazards For Sprouted Seeds may be beneficial and prudent for growers of Microgreens to follow.

MicroGreens have much stronger, more developed flavors than sprouts making them an ideal flavor component with a broad range of leaf shapes, textures and colors.

General Specifications of a Microgreen

In 2012, USDA researchers at Beltsville Maryland in association with the University of Maryland conducted a study on the nutritional properties of Microgreens. This study has been cited at least 13,000 times on the internet since then.

While the results seem promising, there are some concerns with the study. The primary issue is that they did not do the analysis of the mature versions used for the comparisons with the Microgreens. This comparison, of course, is the whole basis for making the claim that the Microgreens are more nutritious than the mature versions. Instead, they relied upon data from the analysis done by others probably a very long time ago, so it is unknown if the same methods of analysis were done.

Another concern: some of the comparisons were not correct such as comparing one type of amaranth in the micro form to a completly different type (and color) in the mature form or comparing a Micro Radish top to a mature Radish Root. In addition, some of the items tested were not actually Microgreens, but shoots. For future studies, there should first be a clear definition of what Microgreens are and the nutritional analysis should be done for both the Microgreen and the mature leaf, grown under the same conditions, in the same study using the same methods of analysis, rather than relying on outside data and variable varieties grown under different conditions to compare.

The takeaway from this study is indeed promising. The most important discovery in this study is that the researchers have found that the growing conditions can greatly influence the nutritional content of Microgreens. When grown in ideal conditions (bright natural sunlight) the nutritional content will be at maximum levels.
From the USDA 2012 study:
“It is also noted that golden pea tendrils, which are grown in the absence of light, processed much lower vitamin and carotenoid concentrations than pea tendrils grown under light, suggesting that light plays an important role on nutritional values during the growth of Microgreens.”

If Microgreens are grown in homes on windowsills, or stacked on shelves in buildings, grown with artificial lights or even greenhouse grown in a less than ideal climate (cloudy or hot and humid), the resulting nutritional value will be vastly different (much less) than what was found in the study since those Microgreens were grown in natural sunlight in San Diego, California.

We are pleased to have worked with the USDA researchers on new studies in which the crops were properly grown, analyzed and compared. While the preliminary results have been mixed, there are positive health benefits being documented for publication.

Several varieties can be mixed together to create combinations of tastes, textures and colors.

Fresh Origins has contributed a summarized version of our original content to the Wikipedia page for “Microgreens”.

Error: There is no connected account for the user 428061639 Feed will not update.