Fresh Origins products were prominently featured throughout the West Coast’s premier epicurean lifestyle event; Pebble Beach Food & Wine 2012.  75 Celebrity chefs matched with 250 acclaimed wineries created an extraordinary four- day destination on one of the most breathtaking coastline resorts in the world.  Throughout the weekend, guests enjoyed intimate access to the pinnacle of culinary and wine talent at wine tastings, cooking demos, and some of the most exclusive, unique dining experiences in the world.

Working feverishly for weeks prior to the event, Fresh Origins and PBF&W Culinary Liaison, Dorothy Maras developed strategic master plan to provide some of the world’s most talented and demanding culinary geniuses with everything from Micro Tangerine Lace™ to Oyster Leaf from an amazing array of dazzling Microgreens, Tiny Veggies™  and Edible Flowers for their exclusive menus.

“It is an honor to see our products truly come to life in the hands of the best chefs in the world!” said David Sasuga, founder of Fresh Origins.

Going to culinary school was the best thing I’ve done for my family’s business.

I started working Fresh Origins, my family’s business, more than six years ago. I did a lot of different jobs, starting with customer service, and moving on to doing graphic design, photography, sales and marketing. I’d been studying these subjects at the University of San Francisco, and it was good to use my skills to help Fresh Origins grow.

I spent some time in the kitchens of chefs using our products, taking photos of the dishes they created and observing how they combined flavors when they used our microgreens. A chef would use our Micro Shiso in Asian dishes, and Micro Basil in an Italian dish.

Of course, I couldn’t use the chefs’ recipes for our business – these belonged to them. I felt I needed to develop my own recipes to showcase our Microgreens, Shoots, Edible Flowers, Tiny Veggies™ and Herb Crystals™.

So I signed up for the San Diego Culinary Institute to get my Commis de Cuisine Diploma http://www.sdci-inc.com/ I devoted nine months to classes and two months to an “externship” at the Red Light District restaurant, where I worked with Chef Jason Maitland.

Jason is a family friend who has been using Fresh Origins microgreens and other products for a long time. Now I could see up close the flavor pairings and combinations he came up with. I was also learning about combining flavor elements at the Culinary Institute  – sweet, salty, bitter, sour, and umami.

I also learned how to plate food attractively – after all, people eat with their eyes first. I saw how to combine colors and textures, how people’s eyes travel on the plate, where you should add height. Now I look at photos of plates I did before culinary school, and I think, “Well, I thought it looked okay at the time…”

My culinary training taught me not just how to prepare recipes, but how to invent new ones.  I gained an understanding of the science behind the food, and an appreciation for experimentation and recipe development.

Now I am Fresh Origins’ research and development Chef. I develop new recipes to showcase our products at the foods shows we attend. I’ll prepare a dish, and then pass out small samples and show attendees how to use our products.

At the last couple of shows, we made citrus ceviche and topped it off with our Flower Crystals™  Fennel. [link to https://www.freshorigins.com/our-products/basil-crystals] Licorice flavored Fennel pairs well with seafood, so I thought it would be great to combine them with shrimp and scallop ceviche. The sweetness of the fennel crystals are a great contrast to the tartness of the ceviche, and they add a nice crunch. People think because the crystals are sweet, they can be used only on desserts and pastries, but they can be paired with savory items, too.

I actually did do a mint chocolate dessert for the food shows: a chocolate ganache pop with a coating of the mint crystals. The crunchy mint is a fantastic flavor combination with the smooth rich chocolate. [link to https://www.freshorigins.com/our-products/basil-crystals].

Most people wouldn’t think of pairing microgreens with a dessert, just like they wouldn’t think of the sweet herb crystals with savory food. But the freshness of the green is great with a rich dessert. I recently created a recipe for a maple, cinnamon and persimmon pana cotta with candied pecans. [link to http://fomicrogreens.wordpress.com/2012/11/29/cinnamon-maple-persimmon-panna-cotta-candied-pecans-with-micro-basil-cinnamon/] It’s garnished with micro cinnamon basil, a basil that really does taste like cinnamon. The fresh microgreen is a great color contrast for the eyes, and it’s a nice fresh texture with the smooth panna cotta.

My culinary training opened up an array of new techniques that have helped me contribute to Fresh Origins more creatively. After culinary school, I’ll never look at a plate of food the same way again.
David & Kelly: PMA Foodservice in Monterey – July 2012

Arc of Flavor: RE-IMAGINING CULINARY EXCHANGE, FROM THE MEDITERRANEAN AND MIDDLE EAST TO ASIA. November 1–3, 2012 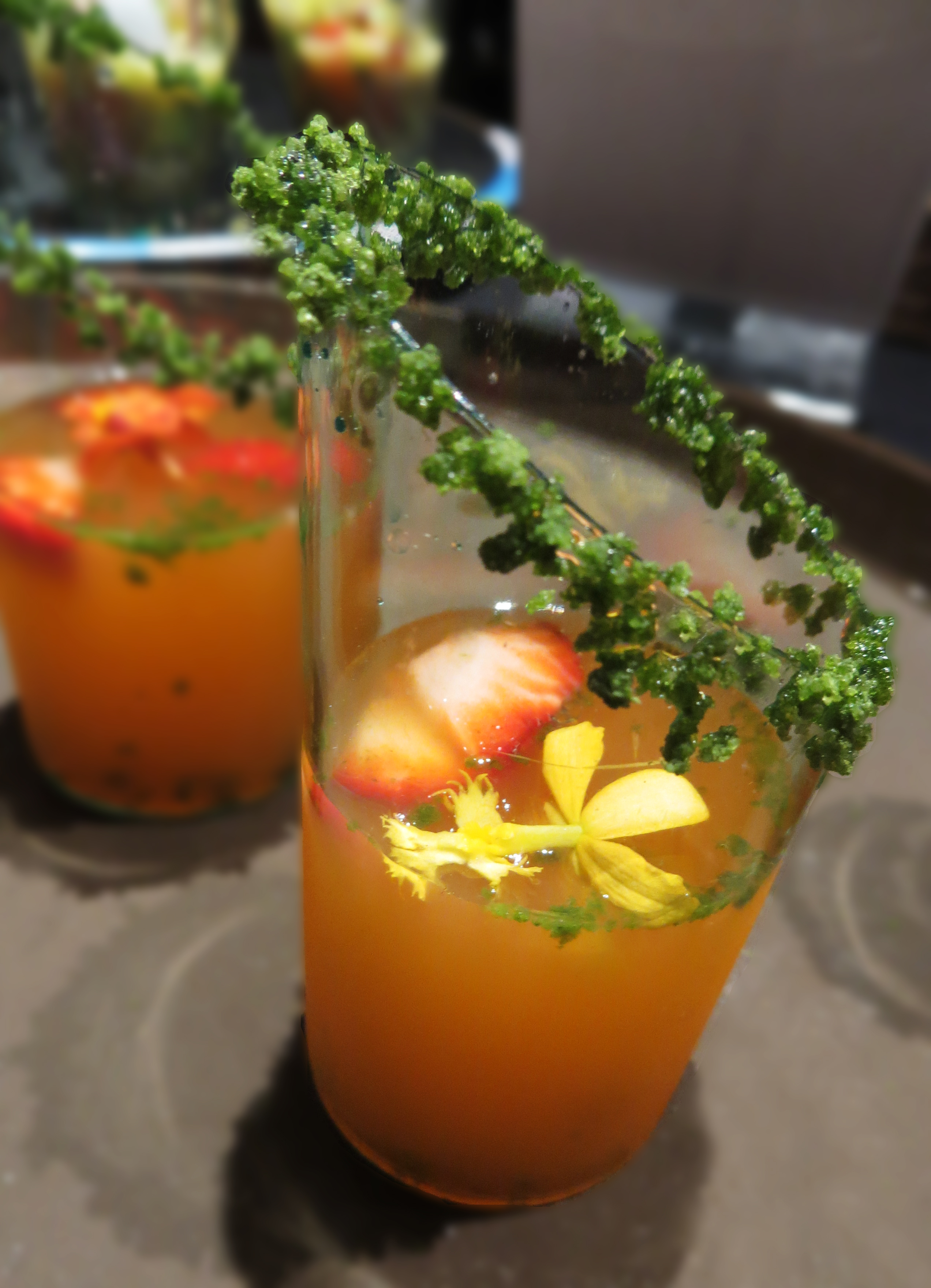 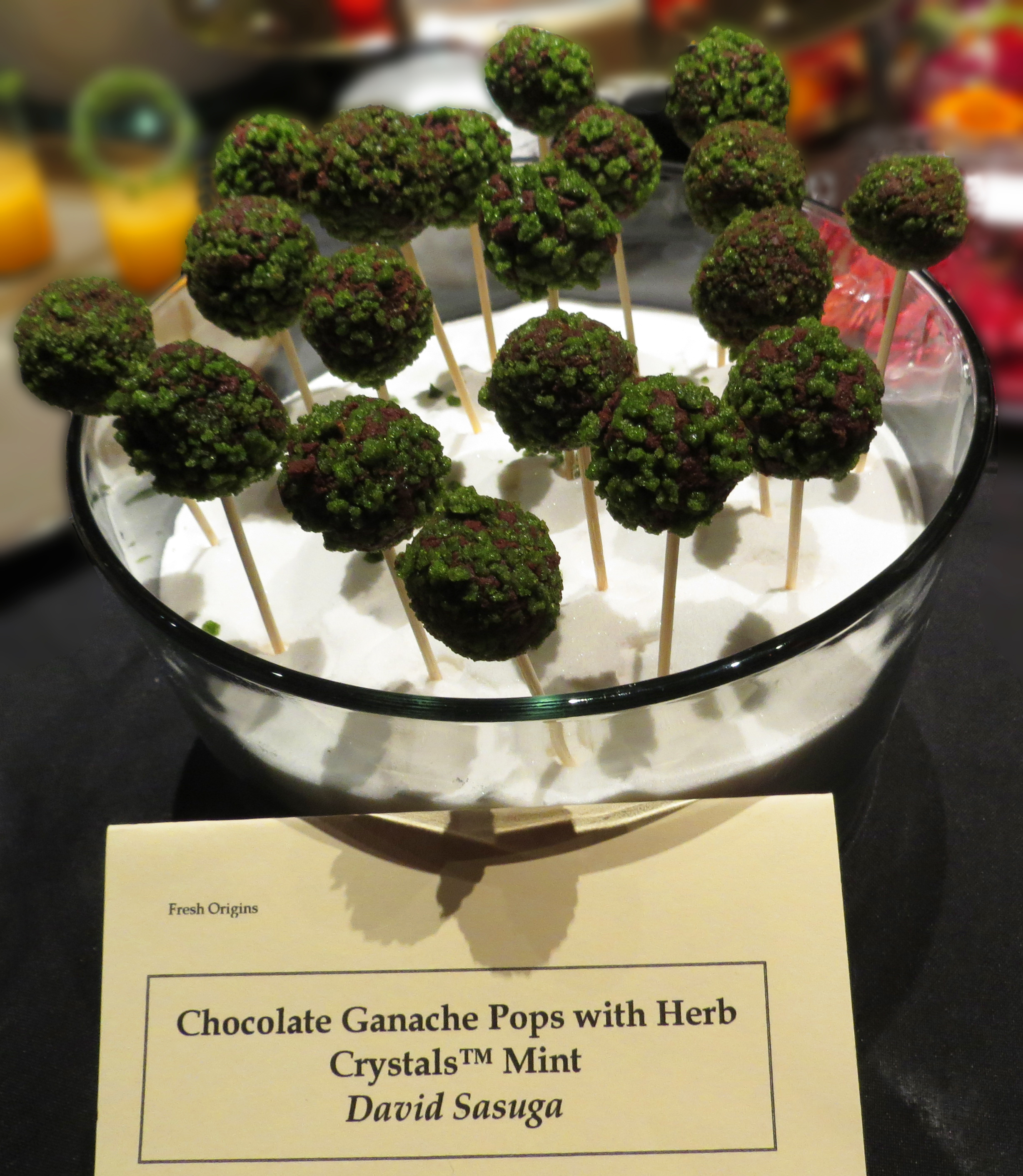 Error: There is no connected account for the user 428061639 Feed will not update.